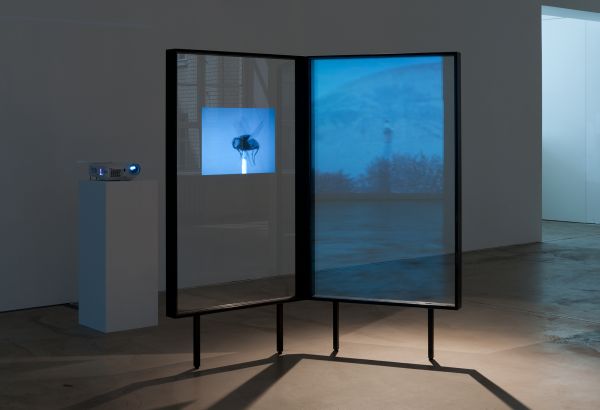 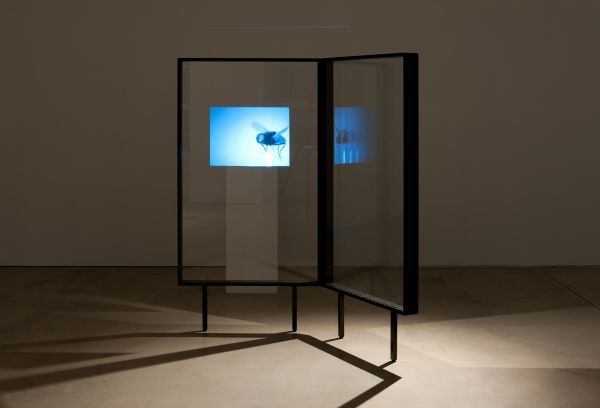 The video sculpture Regarde Les Mouches Voler opens up temporal levels of perception and asynchronism. The staged video of a housefly (Musca domestica) crossing the field of view is recorded with a high speed imaging technique, widely used in the field of science.

In exaggerated slow motion and constant anticipation, the work depicts a movement that is normally invisible to a naked eye. Each individual wing-beat becomes cumbersome and monumental. The resulting film duration is diametrically opposed to the actual flight duration. Tethered to a toothpick, yet another common technique used in entomology, the fly’s movement across the frame is conducted by a human hand.

In the spirit of the French expression “Regarde Les Mouches Voler” (engl. “to stare into space” or literally “to watch the flies fly”), stasis and motion collide, creating a timeless zone in the realm of idleness and boredom.

The work consists of a video projected on a screen applied on transparent glass, framed in a paravent type steel structure. This display refers to the vitrines that can be usually found in museums of Natural History. The video is visible from both sides of the glass screen yet the flight is mirrored. The second paravent screen is made with a halfway mirror, adding to the strangeness of the reflection game.

The video was produced during the artist’s residency at the Insect Flight Lab of the National Center for Biological Sciences (NCBS), Bangalore, India in the frame of the Artists in Lab program of the ZHDK Zurich.