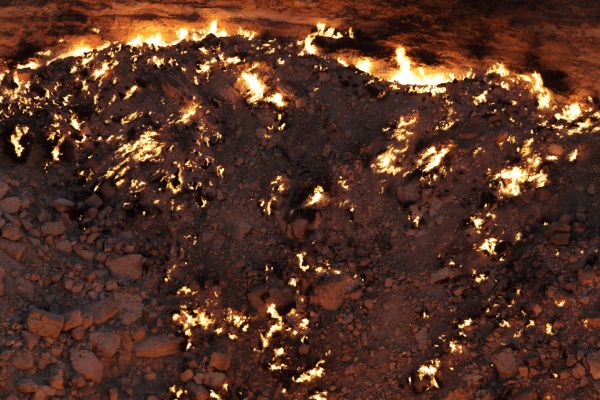 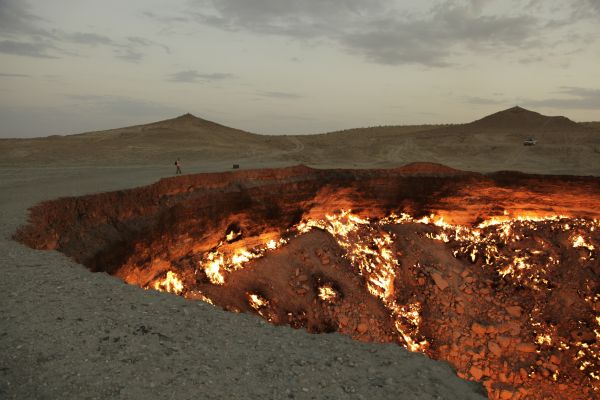 In Turkmenistan in 1971, Soviet geologists accidentally exposed a cavern of natural gas when a mining platform collapsed. Loathe to release the toxic emissions to the atmosphere, they set it aflame; and there it has burned ever since, nicknamed by locals 'the door to hell'. MISSIKA's film explores this infernal portal through a series of long, slow takes, each around a minute in length, in reverse progression from a close-up of sulphurous clouds to a final shot of the barren surroundings – the pit a thick, red scar on a dead world. For MENEGOI, these images recalled the apocalyptic sublime of early-19th-century painter John MARTIN (recently celebrated with an exhibition at Tate Britain). Inverting the usual trend of MISSIKA's work (for example his 2009 photomontage series, "Tueur du Monde", also exhibited, which are mock-ups that seem to show construction workers aboard a space station, a flying saucer taking off over a forest, etc.), the film presents something so Biblical in its horror that we assume it must somehow be a fake, a miniature, a mock-up or some other special effect, but in fact it is terrifyingly real: an everyday, man-made Armageddon. (Robert BARRY)