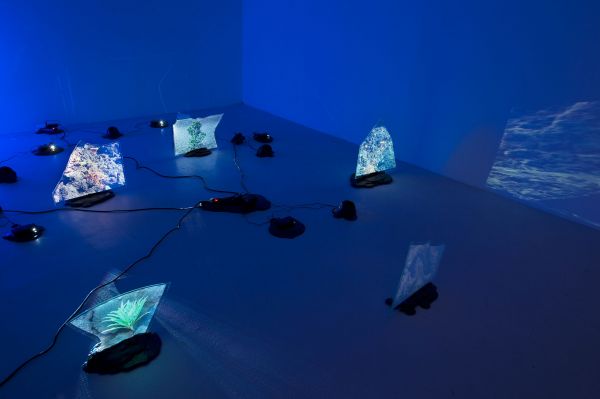 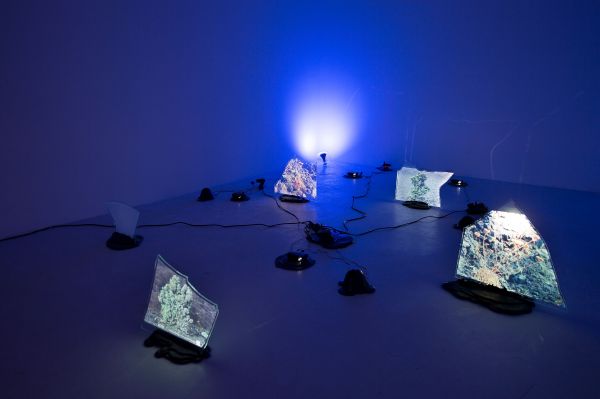 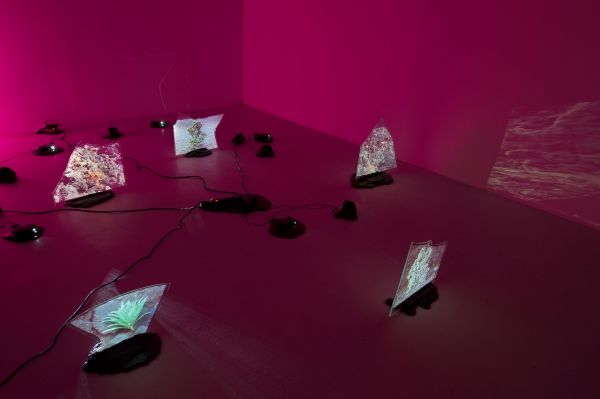 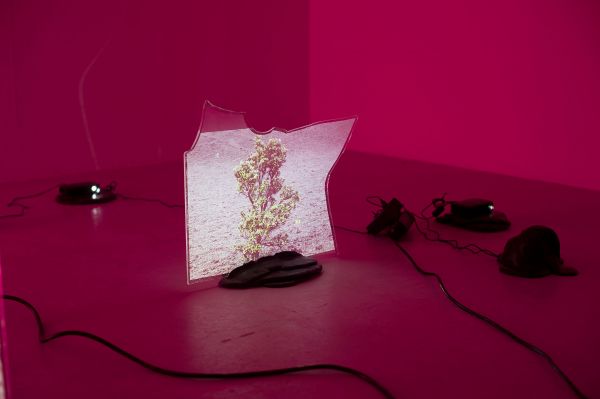 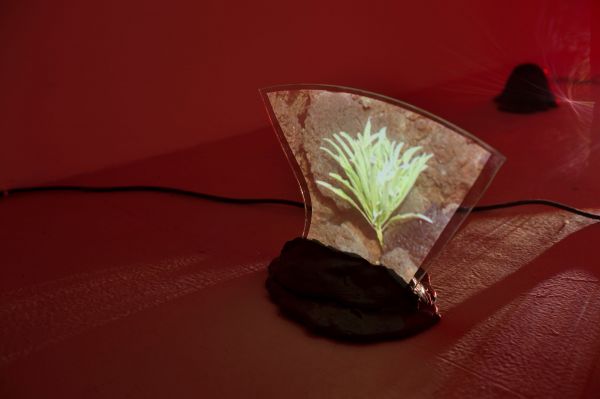 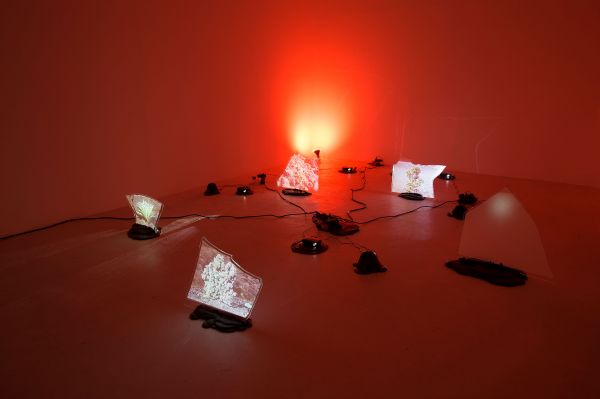 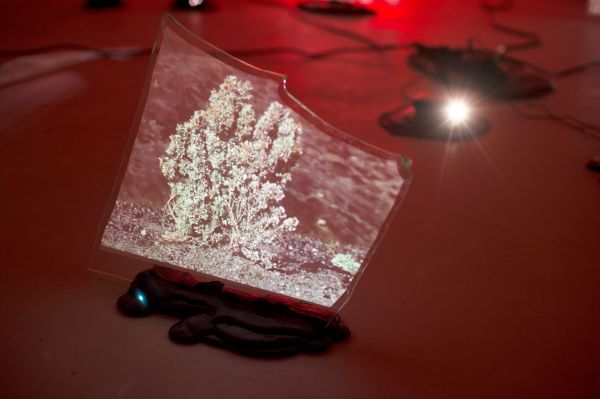 Archipel (Archipelago) is the title chosen by Adrien Missika for his solo show at La Salle de Bains in Lyon, and for the new video installation produced for this exhibition. Well removed from any technological fetishism and any display-related sophistication, it is by way of a decidedly ‘low-fi’ style that Missika has physically and metaphorically re-created this discontinuous network of islands typical of the archipelago. The artist’s conception of Archipelago comes in the wake of several journeys and as a result of the images he filmed at the Kilauea volcano in Hawaii, at the Ubehebe crater in California, and on the Aeolian island of Stromboli. Five videos using static shots, kinds of samelevel and life-size portraits of almost motionless plants, sometimes swaying with the wind, are overhead-projected on stelae of broken glass. These translucent projection screens are affixed to the ground by heaps of black resin thus imitating bits of lava lying no longer in the middle of the sea but actually on the concrete floor of the exhibition venue. Like an orchestra performing a random composition, these five videos form a set, and each plant is accompanied by its own sound track which wavers between concrete music, ambient music, exotica, and synthesised seaside resort music made up in the main of marimba and conga samples, for example. The videos, each of a slightly different length, are looped and thus offkilter in relation to each other. It is also the order in which the projectors start working which determines the audio-visual combination played throughout the exhibition day. Starting out from volcanic landscape that are life-hostile and cold in terms of colour, Missika has nevertheless produced funny images referring more to the absurdity of a stage set or an advertising spot than to any romantic, symbolist or nostalgic scene. What drives Missika’s art praxis is undoubtedly the idea of distancing (which he stresses here by preventing visitors from entering into the installation, forcing them to observe it from a limited viewpoint), the idea of framing, the process of capturing reality (be it filmic or photographic) and the construction of an image as much as the fiction stemming therefrom. To be sure, Missika sidesteps the pitfalls of any grandiloquent and sentimentalist relation to nature, but his approach, which consists in criss-crossing, compressing and interpreting the landscape, and encompassing the notion of entropy, nevertheless, and in many aspects, conjures up the world of Robert Smithson, or the methods adopted by landscape painters between the 17th and 19th centuries, who re-invented the pictorial connection to the landscape by way of the veduta, for example, the whim—namely the recomposition of the scape in the studio—and, later on, outdoor studies and works, live, on the spot. Missika is perhaps a contemporary version of the image reporter or conveyor in the broad sense of the term, thoroughly enjoying the advantages of our age and access to old, rare or even obsolete technologies, as much as to state-of-the-art gadgets and technologies which, barely invented, see their use simplified in order to be applied to mass products. His oeuvre has also become adapted to possible work conditions in the studio, and it is with the circumstances of his technical wherewithal that he invariably composes and complements the formal rendering of these traveller’s experiences. Since the early days of his career, this inquisitive artist, absorbing what surrounds him and alert to whatever is quite simply available, has been quite straightforwardly permitting himself to get away from the field of photography (his initial training) in order to embark on joint projects (as with Victor Tricard for the acoustic environment created for the installation) and spill over into disciplines connected with contemporary art, such as design, from which he borrows display solutions for images, as much as playful uses of material.  What is also involved for Missika is underscoring the deliberate absence of any protocol or system which might inform his output, and reiterating an intentional absence of structure, be it narrative, linked to the art medium, or linked to the sculpted material.